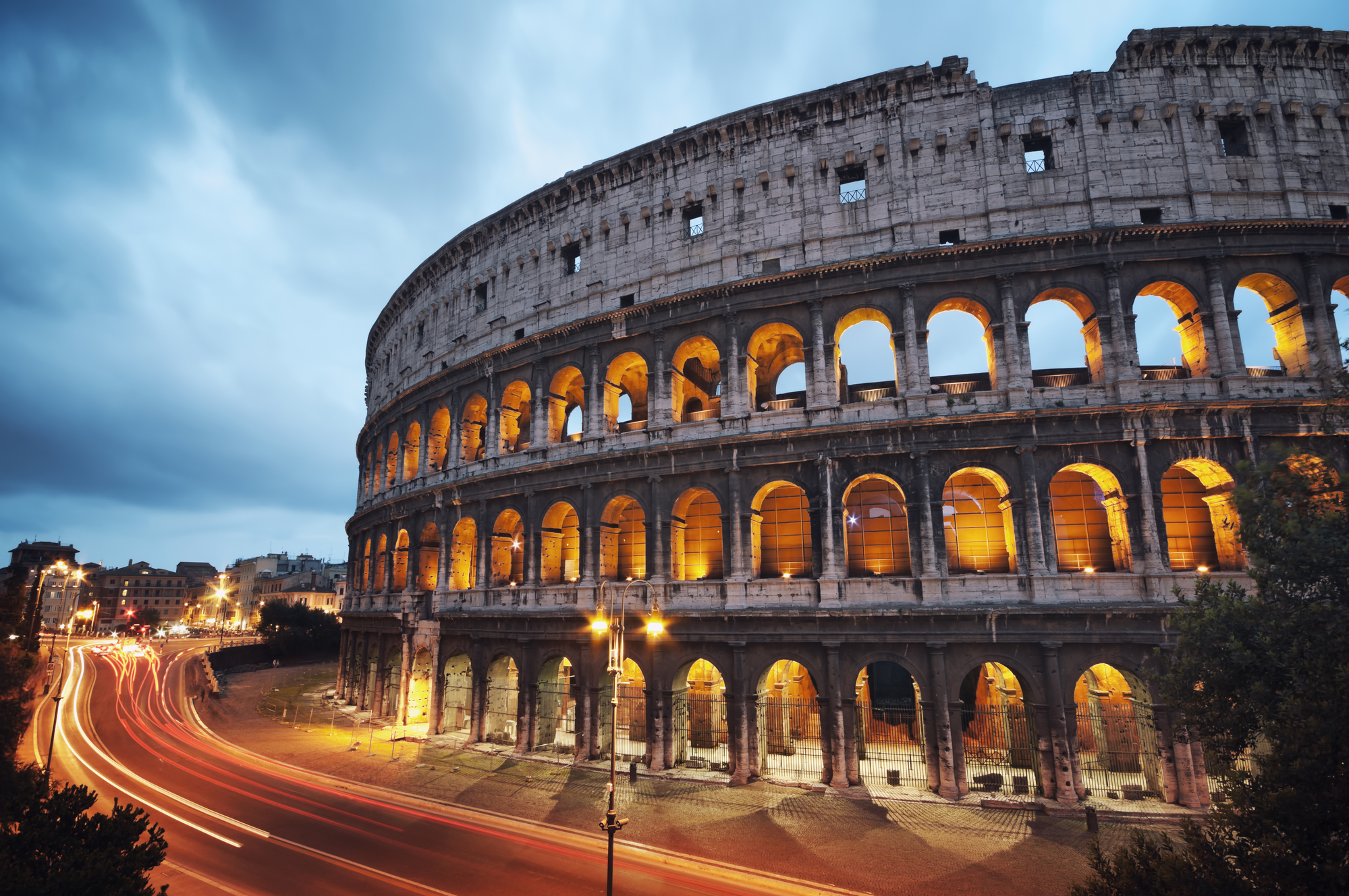 What to see in Rome in 1 day and how to build your own route, what to take from the “Eternal City” to the maximum. Realizing that most of the guidebooks provide a simple set of sights without some connection between them, BlogoItaliano decided to offer a plan for a walk in the center of Rome, which will allow you to see the most important things. And it is best to start the walk with the Vatican.

Helpful tip: When planning a busy day in Rome, set yourself a mobile audio guide in the center for the iPhone with a map that works without the Internet and GPS navigation, which makes it easy to find the way to the nearest attractions, even if you have never been to Rome.

Audio tour includes 62 points on the popular route from the Vatican to the Colosseum. A test version of 5 points is available for free [a full tour costs only € 5], so you can try it out without risking anything. You can try the application on this page.

Morning in the Vatican

The Vatican is not Rome, and not Italy at all. This is a separate state, which will be witnessed by the white-and-yellow flags on the walls. Just warn you – the Vatican is a religious state, you will not be allowed into holy places in short shorts and skirts above your knees. You need to have with you something “nabedrennoe” and long, which can be quickly fastened and then easily removed. Even if you forgot, you can easily buy from local merchants (there are a lot of them in the vicinity of the Vatican).

The Vatican is not just a city in a city, it is a small state inside a big city.

There are many interesting places in the Vatican where you can stay for long. You should definitely look into St. Peter’s Cathedral and stroll through the museums to see the real treasure of the Vatican – the Sistine Chapel.

It is better to come to the discovery in the Vatican, so that there is enough time left and Rome itself, as well as to purchase tickets in advance — via the Internet, so as not to lose precious hours in the queues. Although the visit to St. Peter’s is free, but you will not be allowed to visit museums and the Sistine Chapel without tickets.

When planning a visit to the Vatican, be prepared to lose a total of several hours in queues.

Time in the Vatican flies by. It is best to see the Papal Republic before noon, otherwise the dream of seeing Rome in 1 day can only be a dream. Therefore, without losing time, we set off.

The first thing to do is to cross the Tiber River on the Ponte Vittorio Emanuele II bridge and continue on the same avenue until you see the monument to the Italian politician Marco Mingetti on Piazza di San Pantaleo on your left hand. Here you need to turn left into the narrow street of Via della Cuccagna, which will lead to the famous Piazza Navona in Rome.

Navona Square is the real incarnation of Baroque with all the sophistication and luxury of this architectural style. There are several palaces of the XVII century, two churches and the Fountain of the Four Rivers.

You need to pay attention to the church of St. Agnes (Sant’Agnese in Agone). It was built in honor, as you might guess, of the holy martyress Agnes at the behest of Pope Innocent X. The head of Agnes herself is kept as the main relic in the temple. Next time you plan to go to Rome on your own, read about this place. A mystical and slightly creepy legend is associated with it.

Opposite the Church of Saint Agnes, one can see the Fountain of the Four Rivers (Fontana dei Quattro Fiumi). This work of art was originally conceived not as an independent object, but as a decoration of the obelisk, which in ancient times was brought from Egypt.

But the author of the project, the great architect named Bernini, in this case “overdid it a little”, since the obelisk itself was lost against the background of the magnificence, richness and variety of the sculptures of the fountain composition itself.

From Piazza Navona, it is not far from yet another Rome landmark, which is worth seeing when planning an independent route around Rome for 1 day – the Pantheon (visit is free).

Pantheon is something unimaginable. A completely unthinkable architectural monument, built in 126 in the time of Emperor Hadrian. It was built as a pagan temple dedicated to all gods. In the era of Christianity, he was consecrated and “altered” in this way under the Christian cathedral. The interior is still well-preserved, not least because the church was never empty and was not abandoned.

You do not need to go far from the pantheon to another famous Roman square – Piazza Colonna. It’s very close. This square received its name from the established Column of Marcus Aurelius. In addition to the column in the square, you can see the 16th-century Palazzo Chigi Palace, which currently houses the residence of the Italian Prime Minister himself.

Of course, you will not be allowed into the residence, but one place in which Schiller, Stendal, Goethe and other legendary personalities often visited will be a good compensation. This is a cafe “Greco”, it is located nearby, at Via dei Condotti, 86.

Via dei Sabini from Piazza Colonna will take you to the Trevi Fountain – another of the most “card-based” places that you should see in Rome yourself. This is not only the most beautiful fountain in the city, but also the largest – almost 26 meters.

The Trevi Fountain is a peculiar component of the facade of the Palazzo Poli. Do I need to explain that a coin must be thrown into the fountain? By the way, on the right side of the fountain near the hat on the ledge there are so-called “love pipes” from which you can drink water.

Moving on in our cheerful attempt to get around Rome in 1 day. Return on Via dei Sabini or on the next Via delle Murate to Via del Corso, which also should not be overlooked.

Via del Corso is one of the most “boutique” and “shop” streets in Rome. True, in spite of the official advertising of really expensive and luxurious boutiques there are not so many – they are dispersed in the neighboring streets, but for more budget shopping Via del Corso is just a storehouse.

Another thing is how you, loaded with packages, will continue to walk, but, in any case, you can accurately estimate the price and remember the place for your next trip to Rome. Actually, the very “concentration” of stores will be just at the intersection with Via dei Sabini.

A leisurely walk through the boutiques of Corso Street will lead you to Venice Square, which should also be included in the route of a walk through Rome for one day.

The square of Venice would be nothing particularly remarkable if not for one big “but” – the majestic Vittoriano. This is a monument erected in honor of the first king of Italy, Victor Emmanuel II, who sat on the throne after the unification of the lands.

You may think that the monument is the central statue, but it is not a statue. All this snow-white construction, which by its size pulls into a small palace – this is the Vittoriano monument. Impressions guaranteed!

After taking a lot of photos, turn onto Via del Plebiscito and move forward. After more than 100 meters, you will see Il-Gesu, the main temple of the Jesuits. Sketches of the facade painted by Michelangelo himself. Building the church began Giacomo Barozzi da Vignoli still with the participation of Michelangelo, and finished Giacomo della Porta without him.

One block from the Il-Gesu Square is the Torre Argentina Square. Here you can admire the remains of what used to be a prestigious area of ​​ancient Rome. Now here, on a fenced site, half-destroyed columns are resting among rare vegetation. If you ever decide to go through Rome in one day, and get here at night, consider yourself lucky – in the moonlight this place looks incredibly mystical!

There is another interesting place that is worth seeing in Rome alone – the Capitoline Hill. It is located immediately behind the monument to Victor Emmanuel II. This is an integral component of the cradle of Rome itself – the legendary Seven Hills – the terrain on which the Eternal City was founded. It was here that in ancient times, according to legend, the wolf found the brothers Rem and Romulus and saved them by feeding them with their milk.

The path to the Capitoline Hill lies along the wide staircase of Cordonata, which is also considered to be a kind of landmark of Rome.

Evening and Night in Rome

Having decided to see Rome on my own in one day, in the evening there will be little strength left. But there are two more places that you should definitely see. Therefore, we will have patience and plan a small stop in one of the catering establishments nearby.

The Roman Forum adjoins the Capitol Hill. Unfortunately, only the picturesque ruins have survived from the very heart of the Roman Empire to this day, but even they make you dumb in silence from the realization of that greatness, power and dazzling beauty, which the Eternal City once embodied.

There are their own attractions in Rome: Black Stone, Golden Mile, Navel of the Earth and others. Visiting Rome on your own, do not miss this place in any case.

Well, from the Forum is not far from the Colosseum. Just walk a little along the wide and spacious Via del Fori Imperiali.

You can see the Roman Forum and the Colosseum in the summer until late, the sights are open until 7 pm. But, as in the case of the Vatican Museums, it also makes sense to buy tickets to the Colosseum (and at the same time to the Forum next door) in advance – via the Internet. The queue here can also last for several hours, and the time is already evening and it will be a pity not to get inside.

By the way, for those who want to have time to see as many interesting places as possible in Rome in one day, without losing anything significant, we recommend having step-by-step routes to the most interesting cities in Italy. With their help, you can see much more and learn a lot of valuable life hacking, which will save a lot of time and money.

Any of the similar excursions in Rome or any other city will cost much more.